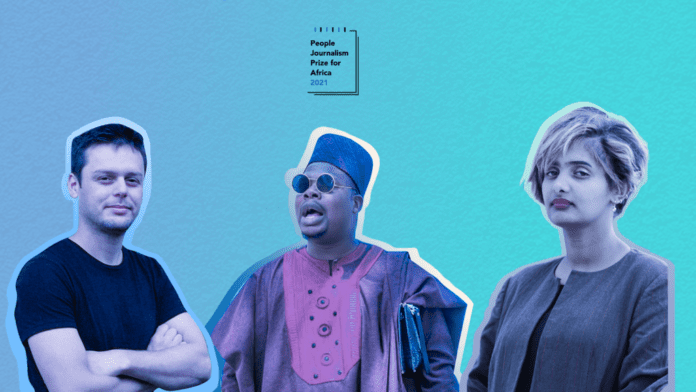 Now in its third year, the PJPA is a public service journalism initiative to recognize and reward journalists, citizen reporters, and social justice newsmakers on the continent. This year’s nominees and winners have been selected by journalists, human rights defenders, and public opinion shapers across the continent.

Daneel Knoetze is an investigative journalist from South Africa and a 2017 Cronkite Humphrey fellow. His work, “Killing the Files,” exposes the Independent Police Investigative Directorate and its failure to properly conduct investigations, hold police accountable and to bring justice to the victims. Knoetze also has a documentary titled  “A Killing in the Winelands” that delves into a cornerstone incident in the investigation.

We selected Daneel Knoetze and the Viewfinder team for exposing a sinister coverup scheme within the South African Police Service’s internal watchdog that offered protection to violent officers.

Lucy Kassa is an Ethiopian investigative journalist who has reported extensively on the war in northern Ethiopia and continues to report on the atrocities committed by all sides in the war in northern Ethiopia. She was attacked and denounced by the Ethiopian government after her Los Angeles Times piece about the atrocities carried out by Eritrean mercenary soldiers in the war-torn Tigray region of Ethiopia. We selected Lucy Kassa for documenting the atrocities of the Ethiopian war, exposing the use of chemical weapons against civilians and the rape of women caught in the conflict.

At great personal risk, Debo Adebayo remained undeterred after the brutal murder of anti-police brutality #endsars protesters in Lagos, Nigeria. He advocated for victims’ accountability and was arrested for leading the #occupylekkitollgate protests in memory of state violence victims. We selected Debo Adebayo for remaining undeterred in his pursuit of justice and accountability for the victims.