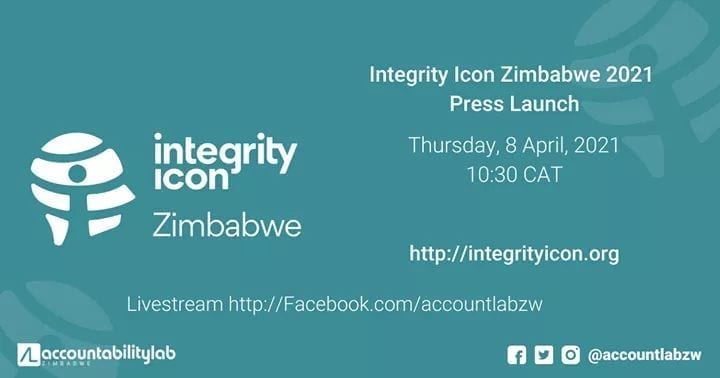 Harare, Zimbabwe (April 2021) – Accountability Lab Zimbabwe is excited to announce the launch of Integrity Icon Zimbabwe, a global campaign to “name and fame” honest public servants. In Zimbabwe, the campaign aims to celebrate individuals working in the health and education sectors who go beyond the call of duty. Through Integrity Icon, the Lab and its partners will build support for their efforts to realise a collective societal shift towards ethical conduct and greater accountability.

When there is a clear lack of accountability, trust in democratic institutions is eroded. The campaign is borne out of an understanding that negative narratives often lead to a sense of hopelessness, and may negate genuine citizen and public service led efforts for reform. Integrity Icon uses positive narratives to address this sense of hopelessness and promote honest and ethical conduct in the provision of public services. The campaign is a positive way to create meaningful conversations about what it means to be a public servant, and shines a light on the role of ordinary people in strengthening national institutions. The campaign is driven by citizens, who, based on their experience, will nominate and vote for Integrity Icons in the health and education sectors. Through these actions, and larger discussions about the integrity of public institutions, the campaign invites citizens to think about and share what is needed to build an open, inclusive and accountable society.

The launch of this campaign comes at a time when the government of Zimbabwe has expressed strong intentions of dealing with corruption in the public sector. Through the National Development Plan 2, Agenda 2030, and Public Service Commission’s plans to reform the civil service, Zimbabwe has committed to building a middle income country grounded in transparency, accountability and good governance. President Mnangagwa has indicated the difficulties of fighting corruption in the country, noting the endemic nature of corruption and lethargic service delivery within public institutions. The President shared that meeting these challenges requires the participation of all citizens and institutions.

The Integrity Icon campaign builds support for public servants’ efforts to improve the institutions in which they work, shifting norms and behaviours towards accountability and integrity. The campaign aims to create role-models and inspire young people by showing that public service is a career path in which they can work with integrity and honesty. It will connect and support the winners to help build coalitions of reformers and value-based decision-making within public institutions over time.

Integrity Icon began in Nepal in 2014, spread to Liberia in 2015 and has now evolved into a global campaign that is also active in Pakistan, Sri Lanka, Nigeria, Mali, South Africa and Mexico,, United States (Philadelphia), Morocco, Somaliland, the Democratic Republic of Congo and now, Zimbabwe. Around the world, there are currently 13 national campaigns that have received more than ten thousand nominations from citizens.