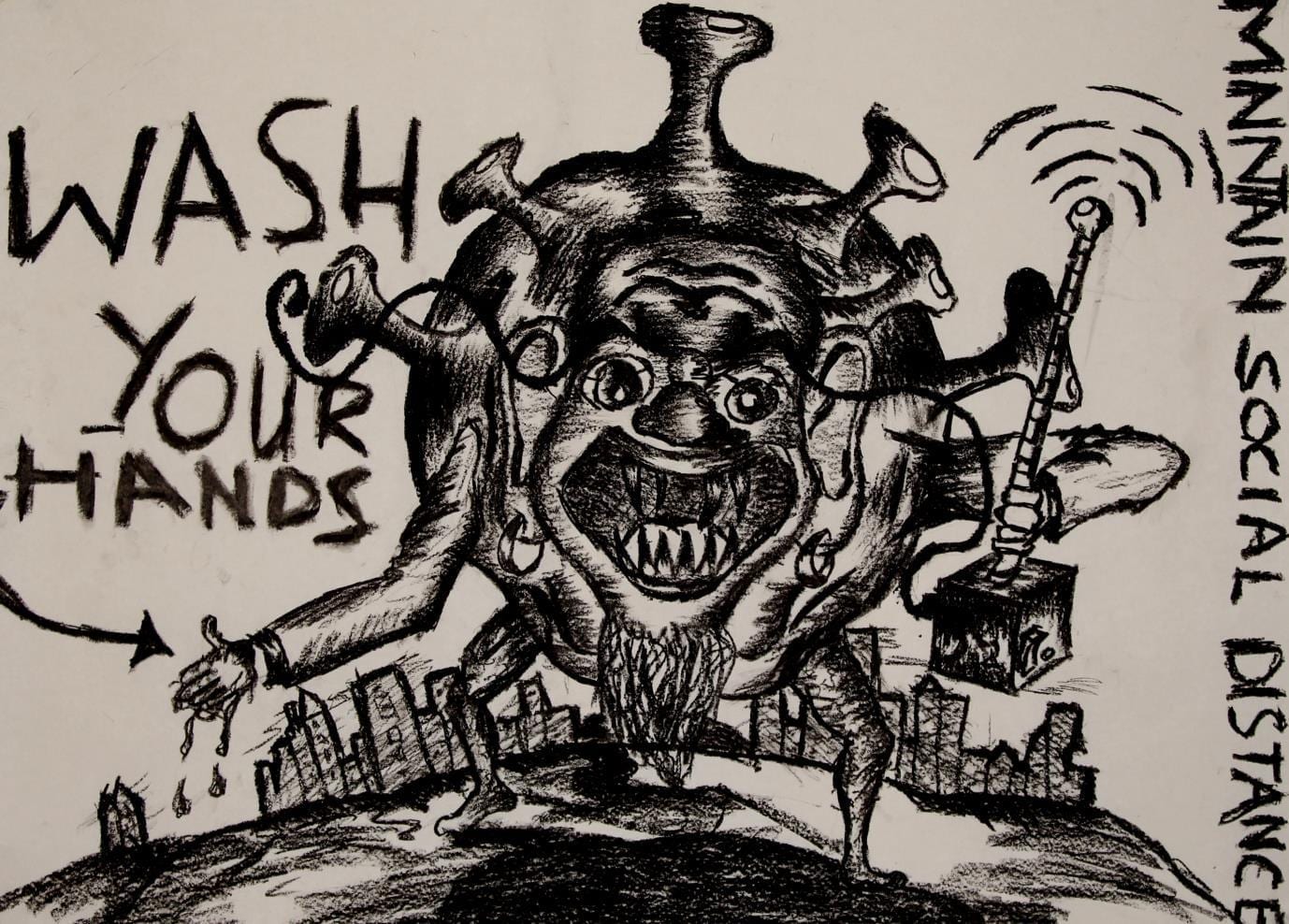 ‘DEMON DECOY’ is an Expressionist, graphic style drawing. It stands as a political statement, a visual communicator of the conjecture or conspiracy stated above quoted from Pastor Christ Oyakilome. Similar to ‘The Summon’, the work is also inspired by the artist, Sir William Blake, chiefly how he would concentrate more on communicating the envisioned composition and convey it without the need to ponder much on draughtsmanship, a quality that also makes this piece more visually dynamic and engaging especially to the intended audience.

The composition of this piece is dominated by a null coloured figure in the foreground which looks like a more personified version of the main subject in ‘The Summon’. The Chinese demon style face, with protruding, vicious teeth which are exposed from a violently opened mouth, situated in the forefront of a sloughing torso that resembles the microscopic representations of the Coronavirus, demonstrated by the protruding antenna-like components of the torso.

The anatomy of the figure possesses two arms in the style of the formal double-breasted suit. Just as in ‘The Summon’, representing the prestigious corporate businessman who is to profit from the implementation of 5G mobile data system.

The right hand is moist to promote and compliment the terms “WASH YOUR HANDS” on that side of the composition. The left one holds a router with a cubic shaped base component which represents a 5G router, which is said, from this Youtube video, https://www.youtube.com/watch?v=-g5ek_9Dipc, shall be of the shape of the 5G transmitters, which shall be secretively distributed in cities.

The figure, according to the nature of the landscape which seems to be a representation of the horizon of the earth and the sky, is very dominant, walking recklessly and clumsily due to its humongous size. This is to communicate the fact that the virus has gained global influence and has affected many haphazardly, with the majority of the people paying the consequences severely, being those from big modern cities. This is why the background has silhouetted figures which are an impressionistic representation of a modern city. The figure, the demon, is departing from the victimised city to its next destination while it still continues to hail the router and administering more chaos.