HomeThe PerchMen Called to be Advocates of Change against Gender Based Violence.
FeaturedThe PerchWomen & Girls

Men Called to be Advocates of Change against Gender Based Violence. 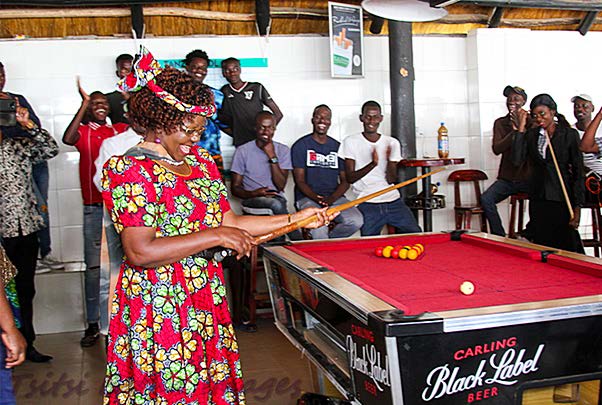 The Minister of women affairs, community, small and medium enterprise Hon Stembiso Nyoni called all men to be agents of change against Gender Based Violence on the 7th of March when she launched the #Mukadzihaashungurudzwe snooker tournament at Tanza centre in Chitungwiza.

The Perch Media Trust organised the #Mukadzi haashungurudzwe snooker tournament which complemented this year’s international women’s day and Hon Stembiso Nyoni hailed the Perch media for localising the theme for local implementation. The Minister emphasized on the full participation of men in ending Gender Based Violence, “What a better and well thought technique to fight our battle than to involve our men and boys in the fight, not only involve them but get them where they socialise and make them part of the agenda”, said Minister Stembiso Nyoni.

People and all men were urged to support women in all spheres of life, “Let us all commit ourselves to supporting women’s aspirations and ensure that they gain access to and own productive resources” said Honourable Stembiso Nyoni. The #Mukadzihaashungurudzwe campaign is an ongoing campaign which will also call for participation of men who will be ambassadors in teaching others on how to end GBV and stigmatisation against women and girls.

In its endeavours to end Gender Based Violence the Perch media has come up with a campaign which will educate and inspire young boys and men to become agents of change against Gender Based Violence and to educate the society to have a positive mind-set because statistics mostly point to men being the perpetrators of abuse and they need to be educated on how to support and empower the women in a non-violent way.

There was a massive turnout of men to the snooker tournament and there is high probability that all men who were there are going to respond to this noble call which is to end Gender Based Violence. Women have been victims of abuse and violence for a long time and it is high time that organizations, ministries,churches and individuals stand out to fight for the rights of women and the girl child making sure that they are protected and empowered.

Zimbabwe is a patriarchal society with male dominance in governance and industry and needs to promote women empowerment which includes women occupying high positions at work places or even in church on merit, without solicitation of sexual or other favours. Hence the Perch Media Trust, its partners and the Ministry of women’s affairs called for the maximum participation of every citizen to end Gender Based Violence and abuse.

Amnesty International, Population Services Zimbabwe, Shamwarri Yemwanasikana and Chitungwiza Provincial Pool Association which partnered with the Perch in this noble cause also emphasized and urged men to take full responsibility in supporting women and ending GBV and also to promote gender parity which is articulated by the United Nations sustainable development goal 5.

Men were willing to participate in the campaign and support the women in every sphere of life making sure that they acquire the knowledge they need in taking up space and also in her speech the Minister revealed that the government and the ministry of women affairs are in support of women and they will make sure that they acquire all the resources they need to empower themselves.

By the end of the two day tournament, it sure was a happy international Women’s Day. For us at Perch Media Trust,this is one of the many ways we contribute to the cause.