A Time with Uncle Steve: “Vicious” the Play 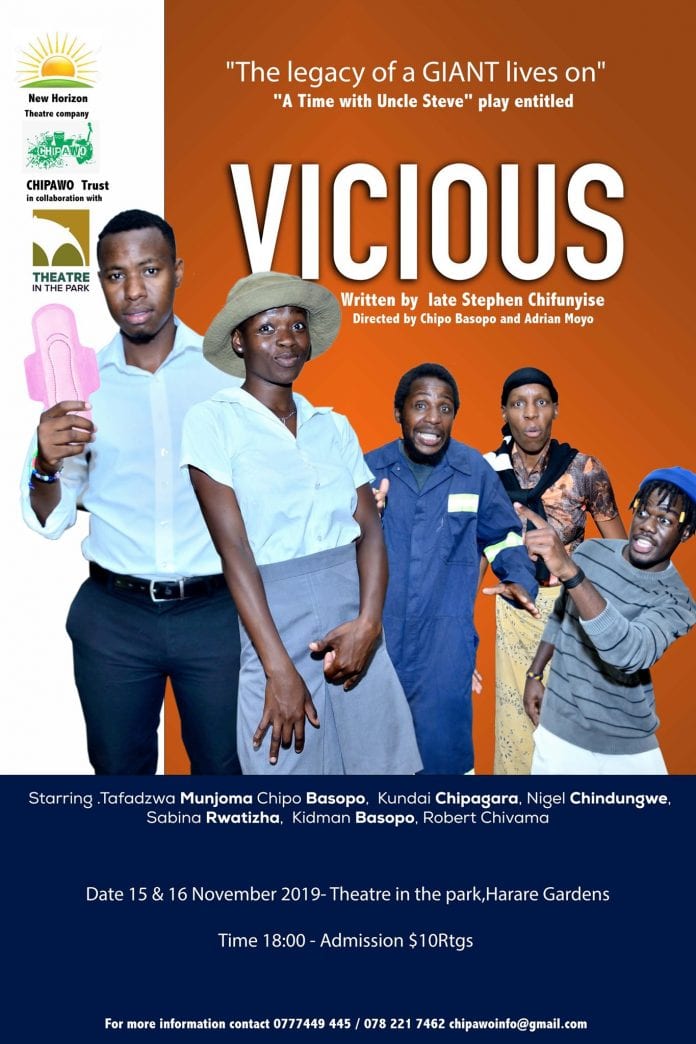 The first play to be staged is entitled “VICIOUS” featuring Chipo Basopo, Tafadzwa Munjoma, Kidman Basopo, Kundai Chipagara, Sabinah Rwatizha , Nigel Chindungwe and Robert Chiyama. The play was specially written and directed for UNFPA by Stephen Chifunyise and is a tragic and classic portrayal of the prevailing poverty in Zimbabwe where even middle-class families with a good income are drawn into poverty by the needs and suffering of their relatives, who come to live with them in town or remain, many dying of AIDS, in the countryside.

The play approaches the problem of increasing poverty and AIDS in Zimbabwe from a fresh perspective, namely the way in which the poverty of the extended family is impacting on families who would otherwise be quite comfortably off. They end up housing, feeding and educating a whole house of children and various unemployed or sick relatives in their houses and can no longer afford the basics for themselves or their children. The predicament is made worse by the fact that culturally it is very difficult if not impossible to refuse to take up such responsibilities.

One of the other major issues is the girl child needs sanitary wear. The family has grown up girls who have started their menstruation circle and in need of sanitary wear which the girl child is in desperate need of. Cultural considerations make sexual health discussions with parents very difficult.

“Chifunyise is/was the foremost Zimbabwean playwright with over 60 plays to his name.  His plays have been performed at the University of Zimbabwe, Theatre In The Park, Reps Theatre and no doubt all over Zimbabwe. He has had a number of collections of plays , short stories and children’s tales published. His themes are all essentially Zimbabwean, exploring Zimbabwe’s culture, its modern mores and topical burning issues, including the political. ‘Perhaps his greatest masterpiece is Vicious, a classic play – up with the very best – on middle class poverty in Zimbabwe. He knew a lot about that as, though a civil servant for many years, he never had a brass farthing to his name. In most of his plays he treated his topics not only with a deep understanding of the issues but also a wonderful sense of humour”, I quote Dr Robert McLaren.

Stephen Chifunyise was the founder of CHIPAWO and Principal of the Zimbabwe Academy of Arts Education for Development. He was also the Chairman of CHIPAWO up to the time of his death.

The New Horizon Youth Theatre Company was founded as a project in the CHIPAWO youth programme in the early 2000s as a youth professional theatre company based in Harare. Recently a new organisation was set up called the New Horizon Youth Theatre Organisation and the professional youth company is now a section in the organisation along with the Membership Programme, the Training Unit and the Youth Opportunities Programme.

Originally the members of the New Horizon Youth Theatre Company were graduates of CHIPAWO and its various performing groups. However, membership of the organisation is now open to all young theatre artists between the age of 18 and 40. The aim of the company is to be a viable professional theatre company which provides its members with a career in the theatre.

The company has a long history of exciting and original plays, starting with the 2002 classic about middle class poverty in Zimbabwe, “Vicious”, by Stephen Chifunyise, This was followed by “The Little Man of Murewa” (2005), based on a story by Hans Christian Andersen, “Waiting for the Rain” (2006), adapted from the well-known novel of that name by Charles Mungoshi, Soul Sister by Stephen Chifunyise, A Journey to Yourself  (2006), adapted from the Norwegian playwright, Henrik Ibsen’s Peer Gynt,  A Doll’s House by Ibsen, The Post Office (2010) by the Indian Nobel prize-winner, Rabindranath Tagore, The Most Wonderful Thing of All, a sequel to A Doll’s House, and The Gaza Monologues, which featured the testimonies of children traumatized by 2014 Israeli invasion of Gaza in. New Horizon has performed its plays in Zambia, Denmark and Norway and nationally in Zimbabwe.

In the first half of 2007, CHIPAWO Media launched a series of performances filmed on stage for television called Onstage. The series lasted for 18 months and New Horizon’s entire repertoire was filmed and featured on Zimbabwe Television.