About the SDG’s: Sustainable Development Goal 4 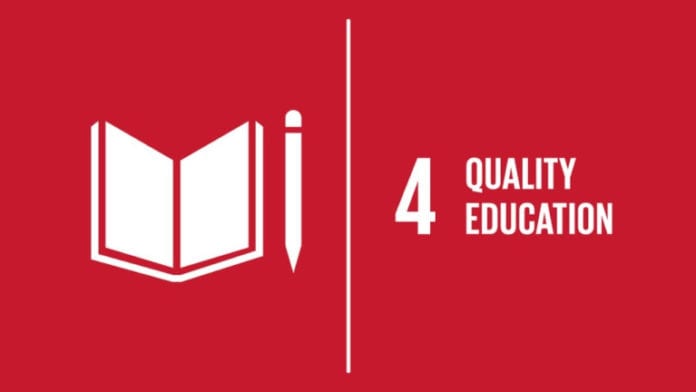 Since 2000, there has been enormous progress in achieving the target of universal primary education. The total enrolment rate in developing regions reached 91 per-cent in 2015, and the worldwide number of children out of school has dropped by al-most half.

There has also been a dramatic increase in literacy rates, and many more girls are in school than ever before. These are all remarkable successes.

Progress has also faced tough challenges in developing regions due to high levels of poverty, armed conflicts and other emergencies. In Western Asia and North Africa, ongoing armed conflict has seen an increase in the proportion of children out of school. This is a worrying trend.

While sub-Saharan Africa made the greatest progress in primary school enrolment among all developing regions – from 52 percent in 1990, up to 78 percent in 2012 – large disparities still remain. Children from the poorest households are four times more likely to be out of school than those of the richest households. Disparities be-tween rural and urban areas also remain high.

Achieving inclusive and quality education for all reaffirms the belief that education is one of the most powerful and proven vehicles for sustainable development. This goal ensures that all girls and boys complete free primary and secondary schooling by 2030. It also aims to provide equal access to affordable vocational training, and to eliminate gender and wealth disparities with the aim of achieving universal access to a quality higher education.

Quality education is one of 17 Global Goals that make up the 2030 Agenda for Sustainable Development. An integrated approach is crucial for progress across the multiple goals.

Despite the considerable progress on education access and participation over the past years, 262 million children and youth aged 6 to 17 were still out of school in 2017, and more than half of children and adolescents are not meeting minimum pro-ficiency standards in reading and mathematics. Rapid technological changes present opportunities and challenges, but the learning environment, the capacities of teach-ers and the quality of education have not kept pace. Refocused efforts are needed to improve learning outcomes for the full life cycle, especially for women, girls and mar-ginalized people in vulnerable settings.

Globally, there has been little progress in the percentage of primary school teachers who are trained: it has been stagnating at about 85 per cent since 2015. The proportion is lowest in sub-Saharan Africa (64 per cent).

What Women Are Really Saying!!

6th May 2022
We use cookies to ensure that we give you the best experience on our website. If you continue to use this site we will assume that you are happy with it.AcceptPrivacy Policy