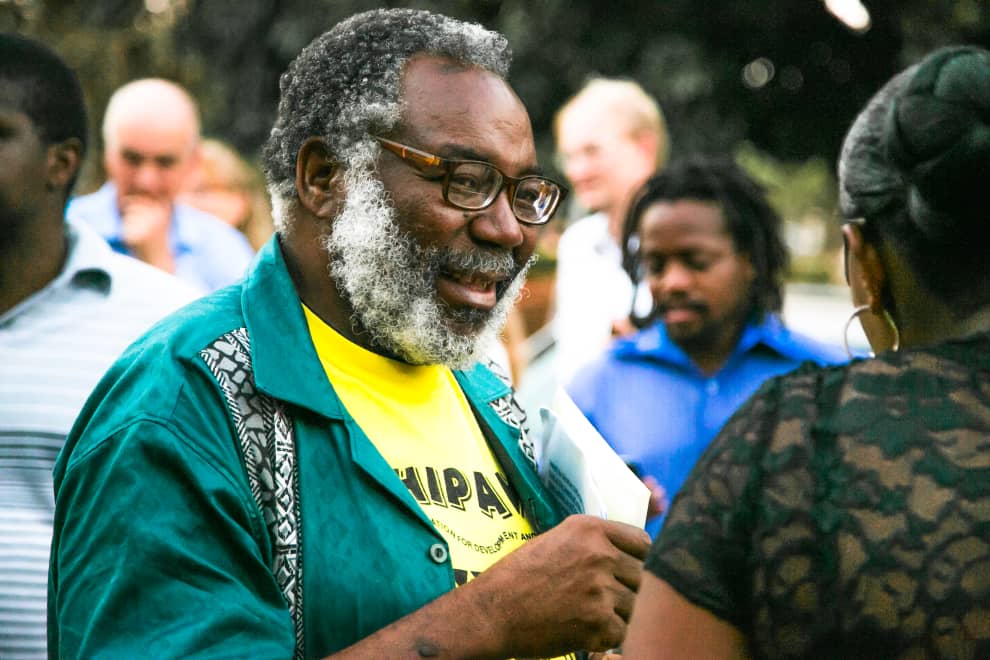 [I did not write this as an obituary. I wrote it some weeks back when Steve was still alive. Now I arrive in Johannesburg after a long journey from Harare by road only to receive the news that he has died. I wanted this know while he was still ALIVE.]

We neglect our cultural giants when they are alive. Once they are dead everyone competes to mourn and shower praises on them.
Stephen Joel Chifunyise can only be described as a cultural giant, possibly more honoured outside his country than within. Internationally and in Africa, Zambia in particular, he looms large.

Chifunyise is an arts and culture polymath. This means he performed with distinction many different roles and displayed a variety of talents. Some are better known than others.

He is without doubt the foremost Zimbabwean playwright now or in the past. His output is staggering – fifty-five performed plays up to 2010! His plays have been performed at the University of Zimbabwe, Theatre in the Park, Reps Theatre and no doubt all over Zimbabwe. He has had a number of collections of plays , short stories and children’s tales published. His themes are all essentially Zimbabwean, exploring Zimbabwe’s culture, its modern mores and topical burning issues, including the political. Perhaps his greatest masterpiece is Vicious, a classic play – up with the very best – on middle class poverty in Zimbabwe. He knew a lot about that as, though a civil servant for many years, he never had a brass farthing to his name. In most of his plays he treated his topics not only with a deep understanding of the issues but also a wonderful sense of humour.

When the Zambian group, Kanyama Theatre, toured Zimbabwe in the early nineteen-eighties, they showed by performing imaginative and exciting theatre without all the fancy props, costumes and other expensive extras that one does not need to be Reps Theatre or have lots of money to make plays. This triggered off the explosion of community theatre groups that characterised the high density areas in the nineteen-eighties and early nineties. It was Chifunyise’s hilarious play on cholera, Mr Polera, which took Kanyama’s audiences by storm.

Chifunyise was not only a playwright. He was also a gifted and skilled performer. He acted in many of the plays that made a name for the Chikwakwa Theatre at the University of Zambia in Lusaka. Here in Zimbabwe he astonished those who knew him as a director in the department of arts and culture and later as the Permanent Secretary of the Ministry of Education, Sport and Culture with his performance of traditional dances and, in particular, his drumming. He was not only able to play but he also had a very deep knowledge of traditional dance and drumming and their meanings in the social context. When he was in the ministry he was instrumental in ensuring that the Mbende [or Jerusarema] dance be accorded UNESCO World Heritage status.

He also played a key role in the growth and acceptance of Theatre for Development and Community Theatre, being a key figure in the organisation and success of the International Workshop on Theatre for Development in Murewa in 1983. He was an active initiater of the Zimbabwe Association of Community Theatre and as well as the Zimbabwe Association for Theatre for Children and Young People [ZATCYP/ASSIYTEJ]. He was quite free from the jealousy and possessiveness which has been a hindrance in the growth of the arts and his support for theatre groups and theatre artists was selfless and unlimited.

In 1989 Chifunyise played a major part in forming the children and young people’s arts education organisation, CHIPAWO, which, largely as a result of his efforts, became the CHIPAWO Trust. When the Board was constituted he became the Chairman. Over the years, working closely and harmoniously with the Executive Director, Dr Robert McLaren, he oversaw the phenomental growth and presided over the ground-breaking achievements of that organisation. His profile nationwide was greatly enhanced by his participation as a storyteller in the popular television youth magazine programme, Nde’pi Gang’a, by CHIPAWO Media.

As Permanent Secretary of the Ministry of Education, Sport and Culture he earned a name for himself by his humble and open door approach whereby those wishing to speak to him were freely admitted. He had a hands on approach too to the schools and often pitched up unannounced and sat in at school meetings. He was likewise popular in the sporting arena and was surely the first ministry official to be voted a sportsman of the year – a feat he performed through his support of basketball, culminating in his being voted the Basketball Player of the Year!

As a journalist in numerous publications, Chifunyise has highlighted the work of artists and enhanced the status of the arts sector. He is an acknowledged expert on Cultural Policy and, less well-known perhaps in Zimbabwe, is Chifunyise’s international and pan-African status in the field of cultural initiative and programmes. In particular, he has done a great deal of work for UNESCO. He has been prominent in promoting the New Partnership for African Development [NEPAD], Intangible Cultural Heritage and Cultural Policy Development, to name but a few.

Stephen Chifunyise has led a life of total dedication to the arts and there are many many people, both old and young, in Zimbabwe, in Zambia and all over the world who will testify to his massive influence on their lives and his undying achievement in the arts.

Read more from the same author:

Be One of Six journalists to attend the Sustainable Energy Forum...

ABOUT US
BLAZER is a Digital Hub for creative content producers between the ages of 12-25 years old. We offer students an opportunity to change the narratives around young people and increase their opportunities to be heard. Our platform offers media training skills inclusive of creative writing, photography, news reporting, video/television production and content sourcing. The Hub site is a presentation of the collaborative work generated by young people. The BLAZER's primary focus is the creation of digital media products about, for and by young people.
Contact us: pitch@blazermag.com
FOLLOW US
MORE STORIES

Spoken Word 26th March 2019
We use cookies to ensure that we give you the best experience on our website. If you continue to use this site we will assume that you are happy with it.AcceptPrivacy Policy