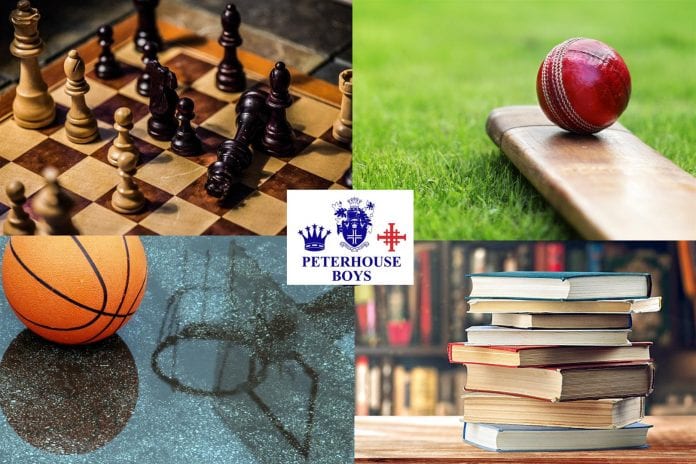 Congratulations to the following boys who qualified for Commendations in the Term Mark Order:

Special congratulations to Rindai Machokoto, he is the 6th Peterhouse Boy to have earned his Gold Award this year.

Interact
The eight 2019 Interact Board members completed the Shoebox Challenge of 2018. Enough stationery was donated by pupils in all three schools to fill 160 shoeboxes. These shoeboxes were given to pupils of St Francis, and other pupils in schools in Rusape and Harare. There were smiles of appreciation on the faces of the St Francis children as they received their boxes from pupils at Springvale, Peterhouse Girls and Peterhouse Boys this week.

The Interact Club thanks all pupils of the Peterhouse Group for their generous donations.

Kukura Neshungu 2018 Report
The purpose of life is not to be happy. It is to be useful, to be honourable, to be compassionate and to make a difference.

There is no exercise better for the heart than reaching down and lifting people up. Kukura Neshungu Club had a couple of fundraising functions earlier this year and raised in excess of $2,600. From these proceeds, the club donated $2,000 towards the much needed repair of the gutters at Kukura Neshungu home in Dombotombo Township in Marondera.

The Club also successfully sourced 35 tracksuits for the staff as well as the pupils of Kukura Neshungu. The Club members were inspired by the words of mother Theresa to help the physically and mentally challenged boys of Kukura Neshungu when she wrote: Love is not patronising, and charity isn’t about pity, it is about love. Charity and love are the same – with charity you give love, so don’t just give money and material things but reach out your hand instead.

The Kukura Neshungu club would like to express our heartfelt gratitude towards the unwavering support we received from the school during our fund raising exercises.

World Scholars Cup Tournament of Champions (WSC)
Six boys participated at the WSC at Yale University in November. They competed alongside representatives from 52 countries in various activities that ranged from team debating, collaborative writing, the scholars challenge and the quiz on the theme of 2018 An Entangled World

This team was awarded a trophy and gold medals for being the best junior team in Africa and Silver medals for Team Writing.

Anotida Nhondova was awarded a Gold medal for being the country’s top scholar and Silver medal for Challenge History and the Scholar’s Challenge.

Tadiwanashe Matara was awarded a Silver medal for Debate and Gold medal for Individual Essay Writing.

Quiz St George’s Inter-Schools’ Quiz competition
Peterhouse A team came 3rd out of 12 teams. Peterhouse B team came 6th out of 10. Overall Peterhouse came 5th out of the 12 schools.

Robotics Robotics Competition Report
The Peterhouse boys’ Robotics Club took part in the 2018 First Lego League (FLL) at Hellenic Sports Club in Harare on Friday 30 November. The theme for this year was ‘Into Orbit’.

There were 11 participating schools and out of that Peterhouse Boys overall came 4th.

Cricket The ‘Macmillan Cup’ awarded to the ‘Best All Round Cricketer’ of the year
This year’s winner:
• took 22 wickets at an average of 9 and economy rate of 2.99
• best bowling of 4 for 10
• scored 370 runs at an average of 53
• top score of 211
• was voted Best Batsman at both the Falcon 6’s and the Lomagundi Super 8’s tournaments
Congratulations to this year’s winner – Ross Mills

Fishing Five of our boys have been chosen to represent the Zimbabwe National Bass Federation, junior team. They following will be fishing in a test against South Africa at Darwendale dam from the 5th to the 10th of December 2018:

Swimming Seven of our boys took part in the Mashonaland Swimming Championships held in Harare over the weekend. They took various events and did extremely well.

Brandon Rouse: Won a total of 7 medals – 2 individual Gold medals and 1 Gold
for relay, 1 Silver medal in individual events and 2 Silver medals for relays and 1 bronze for individual race

Congratulations to Brandon Rouse who has been selected to represent Botswana in Swimming, he will participate in the AUSA Region 5 U20 Youth Games in Botswana.

Be One of Six journalists to attend the Sustainable Energy Forum in Rwanda!

Are you the future of journalism?