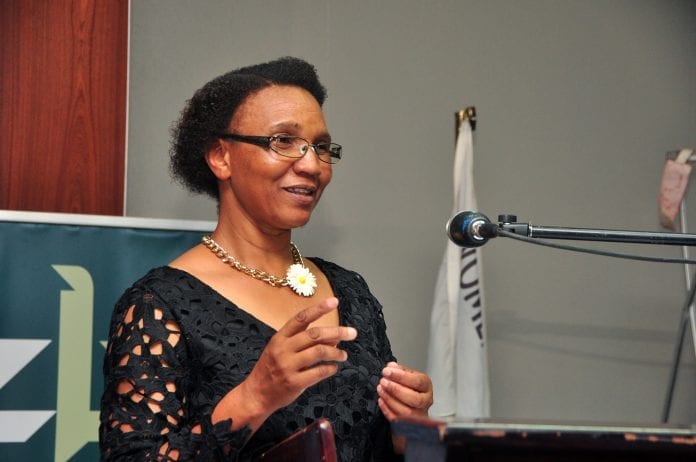 MRS GONO: Public access to information creates an almost universal understanding or appreciation of societal needs. While consensus might be almost utopian to achieve, with full public access to information, building towards it might be key. This anticipates an understanding that men who are the counterparts of women are also part of the drive to support and realise SDG5. It is no secret women are the most affected in issues of climate change,food security, health, conflicts and yet still under-represented in leadership. It is key that they are included on what needs to be done to access information. Access to information is a cross cutting issue in achievement of the 17 Sustainable Development Goals. However implementation of the SDGs, effective 1 January 2016, requires constant monitoring and evaluation as a country and citizens in terms of targets. Effective implementation requires buy-in by communities and society. This can only be achieved through engagement, policy formulation and allocation of resources. As citizens access information and get informed of their rights and development agenda, there is a tendency to participate. Citizens get to understand the importance of inclusivity in the development agenda and diversity. No one should be left behind in development issues. For Zimbabwe in terms of latest census, 52% of the population are women. If decisions are to be made on behalf of the 52% of our citizens by male counterparts only then we won’t progress as country. Access to information then plays a critical role in educating, informing and empowering our citizens to realise the power of numbers and diversity. Women will start to participate in developmental sectors including leadership. There will be increased awareness on rights and the need for gender equality.

MRS GONO: Free, pluralistic and independent media gives wider choice and coverage to citizens to access information that is key to their livelihoods and raises the bar of achievement of the SDGs by 2030 and possibility of peace and development of our people. Such environment also keeps governments under constant check by both traditional and non-traditional media platforms. It pushes governments to build effective, accountable and inclusive institutions to build confidence in its citizens. People will tend to look for alternative information if they lose trust on established information houses. Such environment also pushes media houses to focus on developmental issues for better livelihoods of its communities and society. Poverty in view of ICTs can empower citizens in terms of real-on-time information on climate change, opportunities in terms of markets, jobs available among other issues. However, the access to information should be affordable. The smart phones should be tools which communities can use to access information. Data should be affordable. There should be dialogue and involvement of beneficiaries in content production. Nelson Mandela said, “If you talk to a man in a language he understands, that goes to his head. If you talk to him in his language, that goes to his heart”. Free and pluralistic media also subtracts the element of fear which has bedeviled many African states. It is not that citizens do not want to contribute, but the fear of retribution is real. The citizens therefore take advantage of online or social media platforms to speak at most times under anonymity as they express their views. However even as they debate on crucial issues such as SDG’s that platform of information exchange can even be a useful tool and resource library even for policymakers.

MRS GONO: Promote development of infrastructure especially to non-serviced areas. Great need to rectify gender discrepancies, practices and policies. Promote information dissemination in languages understood by the communities. Develop the Arts & Culture sector as well as the film industry which can translate to economic empowerment.

MRS GONO: Establish effective and inclusive institutions to work with all stakeholders regardless of religion, race, sex, color etc. Promote diversity and buy-in of national goals where everyone aims at achieving set targets for the benefit of communities. The world is calling for poverty eradication, inclusive education, health for all, sustainable cities, peace and justice. If the implementation strategies are at community level and in local languages, it creates a sense of belonging and ownership.

Mrs Gono is the Director of Marketing, Communication & Public Relations at the Women’s University in Africa, which is an institution for higher learning with a mandate to address gender disparity and foster equity in university education. The thrust is to train for leadership positions and narrow the gap between women and men. The institution enrolls 85% women and 15% men of 25 years and above.